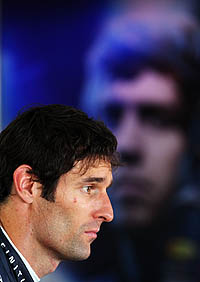 Helmut Marko has cast doubt on Mark Webber's future with Red Bull, suggesting that the Australian is no match for his teammate.

While Webber hasn't been as impressive as he was in 2010, he is joint-second in the Drivers' Championship and, like his teammate, has scored points in every single race this season.

"He has told us that he wants to go on with us for another year," said the Austrian, according to Australia's Fox Sports. "We are looking at this and stability is important for a team."

"We need someone who is as good as Sebastian," he added, "because we have found the constructors' title is very interesting financially, and you can do it only with two strong drivers."

With an 89 point lead in the Constructors' Championship, one fails to see what Marko's beef with Webber might be, while one also fails to see who might be tempted to partner Vettel at what is widely seen as his team.

Though sections of the media are making much over Lewis Hamilton's Montreal meet-up with Christian Horner, the Englishman will be aware as anyone that Vettel is the main man at Red Bull. Consequently, the team would be looking for a very strong number two, capable of consistently scoring points and capable of living with the fact that he is not the star of the show. While Massa, Button and a couple of others spring to mind, the fact is that in Webber the Austrian team already has the perfect man for the job.

Asked about the speculation linking Hamilton with his team, Marko replied: "To our knowledge he is with McLaren until 2013, which is a long time."