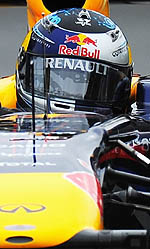 With the ban on off-throttle use of blown diffusers due to come into effect at next month's British Grand Prix, the FIA has announced a further clampdown on engine mapping with immediate effect.

From Silverstone - in a move which many see as an attempt to clip Red Bull's wings - the FIA has banned the use of an ingenious concept which allows teams to use engine mapping to aid downforce.

However, ahead of this weekend's European Grand Prix, FIA technical delegate Charlie Whiting has written to all the teams informing them that they will no longer be allowed to change the engine mapping between the qualifying session and the race.

Currently, teams can use engine mapping to maximise the pressure from the engine and on to the blown diffuser, even when off the throttle. However, the downside to this is that the temperatures the floor of the car is subjected to increases, thereby causing reliability issues, while fuel usage also increases.

It is thought that Red Bull's changes to its engine mapping between qualifying and the race accounts for the car's disparity in performance when its comes to Sunday afternoon - the team switching to a 'safe mode' having secured pole position.

While the Austrian outfit is likely to be the hardest hit, it is expected that with the implementation of the new rules this weekend the entire grid should see a reduction in performance on Saturday afternoon.