Schumacher not surprised by testing pace 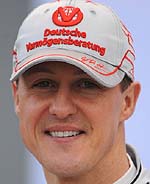 After finding themselves some way off the pace at the start of pre-season testing Mercedes rebounded to end the final test in Barcelona in much stronger form. The change in fortune didn't come as a surprise to Michael Schumacher, who claims the car's performance was always in hand, if not always evident.

It prompted many at the time to write the team off, suggesting it had gone backwards over the winter given its comparative lack of pace. "We knew we weren't on the pace for the first tests," the German confessed, adding that the team working on reliability rather than outright pace during the initial tests.

However, an update taken to the final test in Barcelona transformed the car, confirming the potential Schumacher believed it had always had. "Only the last race (sic) we had the full car together," he claims, "and that was the first time we were able to see if everything works out or not, and it did."

The change in performance was so great that many now believe Schumacher and teammate Nico Rosberg are realistic race winners. Mark Webber, for one, suggests that Mercedes is a team to watch, while the attitude of those within the team seems to have changed dramatically too.