Brawn: Mercedes a second off pace 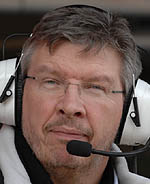 Mercedes team boss Ross Brawn admits that the German outfit is currently a second off the pace, but is convinced a major upgrade will help make up the difference.

Just days after McLaren duo Lewis Hamilton and Jenson Button revealed their fears that McLaren is not currently a match for Red Bull and Ferrari, Brawn has revealed that his team is also struggling.

"We're about a second off where we want to be, which is at the front," he told BBC 5Live, "so we've got to find a second in the upgrade which we think we can do.

"But you never know what others will do," he admitted, "we've set out our plan we'll know at Melbourne if it's right."

Brawn, who earlier this week sold his remaining shareholding in the Brackley-based team to Daimler AG and Aabar Investments PJS, insists that he is still up for the challenge of taking the team further up the grid.

"It's often these periods when you get most motivation," he said, "when you've been there, you don't want to let it go, that's what drives you the hardest, when you've got challenges to face. We're all intensely competitive and we get more motivated when we're not achieving what we want to achieve. We're sticking to our winter plan and we'll know when we get to Melbourne."