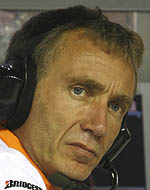 Mercedes has announced the appointment of Bob Bell as its Technical Director from 1 April 2011, further strengthening the team's engineering expertise.

Reporting to Team Principal Ross Brawn, Bell's role will primarily be based at the team's factory in Brackley with overall responsibility for the technical operations of the chassis group. His appointment will allow Ross Brawn greater freedom to oversee the full programme between the team's chassis group in Brackley and the engine group at Mercedes-Benz HighPerformanceEngines in Brixworth.

Bell began his career in motorsport as an aerodynamicist almost 30 years ago, working at McLaren, Benetton and Jordan, before becoming Deputy Technical Director at Renault in 2001. He was promoted to Technical Director in 2003 and played a key role in the team's double championship-winning successes of 2005 and 2006. He remained at Renault, becoming Acting Team Principal in September 2009 and Managing Director in 2010, until his departure from the team in October of last year.

"I am both delighted and honoured to be joining the Mercedes team as Technical Director," said Bell. "It will be a privilege to be a part of such a strong and determined organisation, and to be able to contribute to furthering the enviable heritage of Mercedes-Benz in motorsport."

"We are delighted to welcome Bob," added Ross Brawn. "Bob's appointment is a key step in the strengthening of our excellent technical team and we are pleased to have recruited one of the most experienced engineers in the sport. Bob will be an important asset to our team, bringing with him a wealth of Formula One knowledge and championship-winning experience, and we look forward to welcoming him at the start of April."

"Mercedes-Benz is fully committed to providing our Formula One team with the personnel and resources to compete at the forefront of the sport," said Norbert Haug. "Bob's track record speaks for itself and I know he will be a valuable addition to our team as Technical Director. He shares our passion for competition and our vision for establishing long-term success with Mercedes."