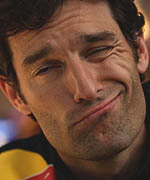 Mark Webber has dismissed out of hand Bernie Ecclestone's proposal that races feature periods when the track is deliberately made wet in an attempt to spice up the action.

Speaking earlier this week, the F1 supremo said that he fears that the latest attempts to improve racing - a moveable rear wing, the banning of various other devices and tyres that should ensure numerous pit stops - will not be enough to spice up the show. Therefore, with an eye on those races which have benefited from changeable conditions and sudden downpours, he suggested that there be periods during events when sprinkler systems are used to create such incidents artificially. Like so much else in F1 these days.

Surprisingly, Pirelli appears to support the idea but this could be because a decent sprinkler system might help wash away the mounds of super marbles their tyres are shedding.

Speaking to the BBC, Mark Webber left Bernie and the fans in no doubt as to how he felt about the proposal. No and no," said the Red Bull driver. "It wouldn't be the most sophisticated way to make the show more entertaining.

"It can be more exciting when we have some different weather conditions, that does happen," he added. "But you just try and think of Jimmy Clark, and Jackie Stewart and Ayrton Senna and those guys, masters in the wet. Jackie's still here but the other two would be turning in their graves if they thought we'd have sprinklers and hoses lined up around the track."

And so say all of us.