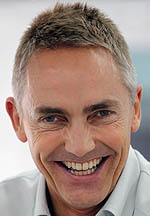 Jenson Button: "Obviously, it was disappointing to be ruled out of the drivers' championship in Brazil last week, but I was very pleased with my race, which was a lot of fun, and I'm already looking forward to another good performance this weekend.

"Last year in Abu Dhabi, I had a similarly great result - I'd lifted the pressure of the championship from my shoulders at the previous race so I was free to race hard once again. I had a great drive, enjoyed a brilliant battle with Mark [Webber] right up until the very last lap, and finished on the podium.

"I'll be hoping for another strong finish this year. Most importantly, it will be my final race with the world champion's number one on my car, for this year anyway! It's been a great privilege and honour to carry that throughout the entire year, and I want to make sure I give it the best possible send-off this weekend. I'm looking forward to a really great race and, hopefully, a spectacular conclusion to the world championship."

Lewis Hamilton: "I've been in the hunt for the world championship at the final race of the season on two previous occasions, so I know all about the pressure you feel when the title is almost within touching distance.

"This year, it feels a little different - although I'm still mathematically in with a shout, I'm fully aware that, being 24 points behind, I'll not only need to win the race on Sunday but see the championship leader finish outside the points. And, even then, that might not be enough. So I'm not feeling the pressure in quite the same way as I did in 2007 or 2008.

"That's not to say I'm going into the race weekend feeling any less determined or motivated: we've seen before that this championship can be unpredictable and volatile - and I think this last race of the year could be even more unpredictable than normal.

"I know from personal experience that the championship isn't over until you cross the line on the final lap - so I'll not only make sure I'm up there at the end, but pushing hard until the very end. "It's going to be a brilliant spectacle, and a great event for Formula 1 fans around the world - I absolutely can't wait."

Martin Whitmarsh, Team Principal: "While it was deeply frustrating for every single one of us to finally be ruled out of the hunt for the constructors' championship in Brazil last weekend, we're all absolutely determined to hold on to second position, and to extend the gap over third-placed Ferrari.

"Both Jenson and Lewis drove absolutely superb races at Interlagos, and the reality is that another double points-finish would likely push us beyond the reach of our closest rivals.

"Even more importantly, we are still in the hunt for the drivers' championship with Lewis, albeit by the very narrow margin of a single point. Nonetheless, we all know that Lewis is a fearsome competitor and is absolutely fired-up to secure a second world title.

"Indeed, let's not forget that Lewis has gone into the final round of the season in the hunt for the title in three of his four Formula 1 seasons - a quite incredible record. And, knowing Lewis as I do, he will be absolutely determined to drive a relentless race in order to pressure his rivals as much as possible in order to maximise his position.

"For this final race, the team's role is simple: we must provide Lewis with the support he needs to sustain his title challenge - that will call for faultless reliability, a slick and decisive strategic plan and perfectly executed pitstops from his pit crew. It may sound like a long-shot, but I'm absolutely convinced that Lewis, Jenson, and Vodafone McLaren Mercedes, will all be players in what promises to be an absolutely enthralling world championship showdown."