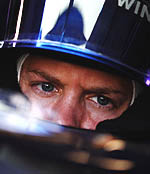 Ahead of today's opening free practice session, the air temperature is 23 degrees C, while the track temperature is 29 degrees. It is bright but there is quite a bit of cloud.

Tyre options this weekend are hard (prime) and soft (option).

Only one reserve driver is on duty this morning, Jerome d'Ambrosio driving Lucas di Grassi's Virgin.

While most of the teams are now looking ahead to 2011, the three title contenders continue to upgrade their 2010 cars with McLaren, in particular, bringing a host of new components here. Indeed, earlier this week the Woking outfit's managing director Jonathan Neale revealed that today will be a glorified test session for his team.

Five minutes into the session all but Kovalainen and Alonso have been out however, moments later the Lotus and Ferrari head down the pitlane.

Alonso stays out for a second lap, the Spaniard having said earlier today that he regards himself a favourite for the title.

While Alonso returns to the pits after his second installation lap, Buemi, Heidfeld, Kubica and Vettel return to the track.

Eighteen minutes into the session the McLaren duo have the track to themselves, Hamilton and Button testing a raft of updates including a new rear wing, new front wing endplates, revised F-duct and a tweak to the diffuser.

Twenty-six minutes into the session, Yamamoto posts the first time of the day, the Hispania driver crossing the line at 1:42.950. As d'Ambrosio posts 41.963, Yamamoto improves with a 41.821.

Hulkenberg goes straight to the top of the timesheets with a 35.789, the German still not certain of keeping his seat with Williams next season. Moments later Kobayashi leapfrogs the German with a 35.641.

On his first flying lap, Massa goes third with a 35.213, Hulkenberg having raised the benchmark with a 34.035. Moments later Schumacher posts 34.251 to go second.

Hamilton posts 34.340 to go sixth then immediately goes quickest in S1 of his next lap. The Englishman posts a personal best in S2 finally crossing the line at 33.643 to go quickest. Button posts 34.977 to go eighth however, moments later he is leapfrogged by Webber with a 34.762.

Having gone quickest in S1 Hamilton gets it wrong at Degner 1 running wide and clouts the barrier on the outside of the track on the approach to the bridge. The Englishman's body language, as he leans against bridge, head down, helmet still on his head, says it all. The damage to the left-hand side of his car is extensive.

With the session still at the halfway stage Button will now have to should the full responsibility of testing the various updates.

Vettel has upped the ante with a 33.157, ahead of Hamilton, Kubica, Webber, Barrichello, Hulkenberg, Schumacher, Massa, Rosberg and Kobayashi.

Several minutes after his crash, and yet to get a lift back to the pits, Hamilton is still wearing his helmet.

A 33.639 sees Sutil pop up in second as Alonso comes close to replicating Hamilton's mistake.

While the usual suspects - Lotus, Virgin and Hispania - fill the bottom six positions, the Toro Rossos are not doing much better, both over 2.5s off the pace.

Heidfeld goes sixth in the Sauber (33.791), the German seeking a seat for 2011 having only recently displaced Pedro de la Rosa.

Vettel goes quickest in sectors one and two crossing the line at 32.725. Moments later Kubica takes second from Sutil with a 33.380.