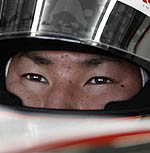 Both drivers had to venture into unknown territory during the first two practice sessions ahead of the Singapore night race. While Nick Heidfeld drove the 2010 car and tyres for the first time, Kamui Kobayashi had to familiarise himself with the challenging city circuit.

Kamui Kobayashi: "Wow - it was really hot in the car here. But I like the track, and turn five especially is a nice and fast corner. The bumps are not too bad and didn't come as a surprise to me. I found it difficult to reach the limit today because after the rain the correct line was very narrow. I made a few mistakes, but I didn't hit anything. We managed to improve the set-up a bit between the sessions, but we still have to find a better balance to make the best use of the tyres."

Nick Heidfeld: "Given it was my first day back in the team and also in the 2010 car I'm very happy. I enjoyed driving a lot. At the beginning it was a bit difficult because the track was wet. I just took it easy and tried to do as many laps as possible. For the second session we changed a few things, but it is clear two sessions are not enough to analyse everything. I see many areas where we can improve the set-up of the car and areas where I can improve in getting the best out of the car. The track itself with regard to the bumps has improved compared to 2009."

James Key, Technical Director: "Our work was cut out today compared to normal Fridays, because for Kamui it was about first learning the track and for Nick driving for the first time with the new car and current tyres. We started off today in wet conditions and it seemed to go well. Kamui put in some good lap times, while Nick started to familiarise himself with the car. Due to the damp track, the tyre temperatures were quite low in the first session. Between the sessions we had a good look at the data and the second session was okay. We continued to work as planned, except we had to replace the same new hydraulic component on both cars. We are midfield at the moment and are working to improve from there."