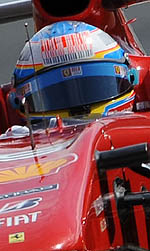 In the wake of reports that Ferrari is concerned at the reliability of its engines, the Italian team claims that issues which effected the works cars and Saubers in Malaysia were unrelated and that there is no cause for concern.

Even though the Maranello outfit heads the Constructors' and Drivers' championship, the decision to change the engines on both its cars the season opening Bahrain GP, coupled with Fernando Alonso's problem in Malaysia, not to mention Pedro de la Rosa's failure to make it to the grid at Sepang, has led to claims that the team has serious concerns as to the reliability of its powerplants.

Not so, says Luca Marmorini, the Italian team's head of Engine and Electronics Department: "We have carried out an in-depth study into what happened and the two problems are not related to one another," he said. "In Sepang, Fernando's engine suffered a structural failure, of a type we had never seen during the winter. We believe there was a role played by the unusual way in which the driver had to use the engine during the race, because of the gear selection problems he experienced right from the start.

"Additionally, there is no connection with the problem the Sauber team experienced on the engine front at the last race," he continued, "which we believe was down to an issue with electronic sensors.

"Each car has eight engines it can use per driver over the season and we plan our useage strategy around this. As a precaution, we opted not to use the Bahrain race engines in Australia, but they will be used in China, having concluded that they are fit for purpose, despite what happened at the Sakhir circuit."

Looking at the overall showing from the opening three races from an engine performance perspective, Marmorini remains satisfied: "I'm happy because I think the Ferrari package is quick, even if it could always be quicker of course. Having said that, our pace in the race can give cause for satisfaction on the engine and car side, even if we still have much work to do on the engine front, getting even more out of it, working within the restrictions of the current regulations."

The regulations demand that engine development is frozen in terms of producing more power, with no physical changes allowed to the majority of components. However, the Maranello team's engine department is not sitting idle: "Our work centres on the previously mentioned consumption and reliability of course," said Marmorini. "Furthermore, we also work in conjunction with the chassis side, to look at improving the installation of the engine and its ancillaries, so as to allow other areas of the package - aerodynamics for example - to be developed to produce more performance as the season progresses."

With the ban on refuelling, reducing fuel consumption has been one of the main themes occupying the minds of the engine specialists. "Unfortunately, I would say that so far, it is impossible to have a clear picture of how this side of the package is working, as there has not been a single race weekend not affected by the weather. In wet conditions, fuel consumption is a bit harder to control and becomes a less important factor. It's fair to say we have done a good job so far, based on work carried out last winter, but we continue to work on this aspect of engine behaviour to improve still further. Once we have a race weekend that is completely dry, we will get a clearer picture of where we stand."