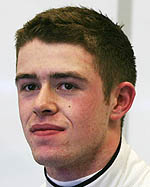 Force India has confirmed that Scotland's Paul di Resta will be the team's test and reserve driver for the 2010 season.

Twenty-three year old Paul, from West Lothian, who impressed the team during his three day test in Jerez in December 2009, will attend all races on the 2010 calendar. The team envisages he will participate in a number of Friday practice sessions to fully understand the VJM03, particularly given the ban on in-season testing will continue into next year.

Additionally the Scot will combine his F1 activities with a programme in DTM, which will serve the dual purpose of allowing him to learn the current F1 tracks while keeping his racing skills sharp.

Dr Vijay Mallya, chairman and team principal: "I would like to thank both Paul and JR Hildebrand for their commitment in the test in Jerez. Both worked very hard and were impressive in the test. We are very proud to have someone of Paul's calibre joining the team as his potential was clear in the test and he has the right attitude for making it in F1. The programme we have put together will allow him to get to grips with the car, the team and the environment and various pressures associated with F1 and we look forward to this becoming a very fruitful partnership."

Paul di Resta: "I am ecstatic to finally get the chance to move into F1 at last. I'm pleased I can start my F1 career with Force India, a team that has a lot of potential. I see this move as taking me one step closer to achieving my dream of racing in F1 but I know I have a lot to learn in terms of the car and the tracks right now. I think this programme is a perfect way to prepare fully and be ready to go if and when the chance of a race seat comes. I hope this will be the start of a long-term future with Force India. With the support of all of the team, including Whyte & Mackay, I'm sure we will grow together."