Sutil continues to set the pace 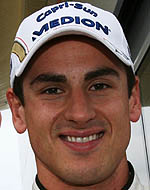 Ahead of today's free practice session, the air temperature is 25 degrees C, while the track temperature is 31 degrees. There was heavy overnight rain, however, the track has fully dried, the sun is shining and barely a cloud in the sky.

While the McLarens dominated yesterday's early session, the afternoon session was far more difficult when it came to assessing who's hot and who's not, with Adrian Sutil leading the way from the Renaults.

Tyre options are medium and soft, while McLaren, Renault and Ferrari are all using KERS, which is believed to be worth half-a-second here and will come into its own in qualifying.

The two things that really stand out from yesterday are the amount of drivers who got things wrong at the first chicane and the way drivers are having to deal with the revised kerbs at Turns 1, 2, 3 and 4.

When the lights go green it is Liuzzi who leads the way, followed by Sutil, Buemi, Alguersuari, Kubica, Hamilton and a whole host of others. Elsewhere, Jean Alesi is warmly greeted in the Ferrari garage. Within minutes he is chatting away with Michael Schumacher, two F1 legends.

Much like the early Friday session, the drivers complete a sole installation lap before heading back to their garages. Within five minutes of the start of the session all twenty driver have been out.

Twelve minutes into the session, Fisichella is the first driver to break the deadlock, followed, shortly afterwards, by Alguersuari.

Fisichella crosses the line at 28.402, with Alguersuari posting a 28.748 moments later. Liuzzi, Buemi, Sutil, Rosberg, Raikkonen and Nakajima are also on track.

As Fisichella posts 27.173, teammate Raikkonen goes quickest in the first sector and Liuzzi in the second. Liuzzi goes quickest with a 26.268 as the Finn posts 26.477 to go second.

As Liuzzi improves with a 25.332, Buemi posts 25.862 to go second. Meanwhile, Button is on a five-lap run on old medium tyres. Fisichella locks up at the first chicane and has to miss the entire complex.

Raikkonen goes quickest with a 25.309 as fellow-Finn Kovalainen goes fourth. Seconds later, Hamilton takes the top spot with a 25.180, still almost 2s off yesterday's times. All but Webber are on track.

Next time around, courtesy of a nice tow from a Toyota on the back straight, not to mention KERS, Hamilton crosses the line at 24.778. Glock goes second, ahead of Liuzzi, Button, Raikkonen, Sutil and Buemi.

It's all over for Fisichella who crashes out in the Parabolica, much to the obvious dismay of his crew. The Italian makes his way back to the pits still wearing his helmet - a classic sign that the driver screwed up. The replay shows that the former force India driver did indeed leave his braking too late. No doubt the British media is already thinking up a witty nickname for the Italian.

The session isn't red flagged while the Ferrari is removed but the rest of the drivers opt to return to their garages anyway. After a couple of minutes, Webber heads down the pitlane, the Australian yet to post a time.

As Sutil goes quickest in the final sector, closing to within 0.059s of Hamilton, All but Grosjean and Alguersuari are on track.

Hamilton raises the benchmark yet again with a 23.929, the first driver to dip into the 1:29s this morning. Elsewhere, Sutil gets mightily out of shape but keeps it all together. Next time around, the German crosses the line at 23.735 to go quickest, the fastest lap of the weekend thus far.

In the Toro Rosso garage, Alguersuari's car is up on its stand, which suggests his session may have come to an early conclusion. It's thought the Spaniard has a gearbox problem.

Button moves up to third with a 23.986 as Liuzzi goes sixth, ahead of Alonso, Buemi and Raikkonen. The top eleven are covered by 0.997s.

Having got it wrong at the second chicane, Grosjean makes another mistake at Ascari, the Renault taking a long bumpy trip through the gravel.

Asked about his aero balance, Sutil replies, "It's quite good, I wouldn't change anything".