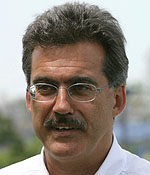 In a brief statement issued today, BMW team boss Mario Theissen reveals that a buyer has not been found in time to allow the German-Swiss outfit to sign the new Concorde Agreement.

"Since the announcement on 29 July of our strategic realignment, we have done everything in our power to reach a rapid agreement on the sale of the team based at Hinwil. Regrettably, despite every effort, this has proved unsuccessful. The tight timeframe we faced simply did not allow us and the interested parties and investors enough time to find a solution for such a complex transaction.

"This means the team cannot sign the Concorde Agreement at present. The aim now is, over the coming weeks, to find a solution together with potential interested parties and Peter Sauber. Beyond that, we will see the 2009 season through to its conclusion with our unstinting sporting commitment."

Other than Sauber there is continued speculation linking three-time World Champion Nelson Piquet with the Munich and Hinwil based squad.