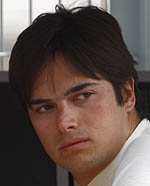 Speaking in Hungary, Nelson Piquet has admitted that he fears for his F1 future, even to the point of being dropped by Renault before the end of the current season.

In recent weeks there has been growing speculation regarding the Brazilian's job, much as there was regarding Sebastien Bourdais at Toro Rosso. Now, with the Frenchman dropped in favour of Jaime Alguersuari, there is widespread speculation that Piquet is next for the chop.

"The problem is that these days contracts in Formula One don't mean much, and we have seen several cases already of drivers and teams breaking contracts, and it just stays that way," said the Brazilian. "The only thing I can do is drive, do my best and leave my father to do his job and see what we can do.

"It is not 100 percent settled for the rest of the season," he continued. "That is why I am going to do my job and let my father do the rest.

"I have been facing this kind of situation since last year so it's not something new for me," he added, "this is only part of the stresses of motorsport."