di Montezemolo takes a swipe at the FIA 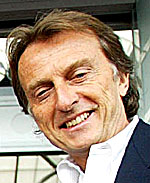 Never one to miss an opportunity, Ferrari President and FOTA Chairman, Luca di Montezemolo, in his role as guest starter of the Le Mans 24 Hour Race, used the occasion to take a fresh swipe at the FIA.

"It's great to see so many people here for a car race, it's a fantastic atmosphere." the Italian told reporters after enjoying a lap of the legendary French circuit in a Ferrari California driven by Maranello legend Jean Alesi. "Thinking about all these enthusiastic people and about the empty grandstands at Istanbul last week I think that there's something wrong.

"But today I don't want to sadden myself by talking about Formula 1," he added. "You all know our position, we've told you more than once: we want stability, certain rules, a clear and transparent governance system and the possibility to let the teams work the way they already showed they can work on a reduction of the costs. I really hope that we can find a solution: I'm convinced that there are responsible people at the FIA, who know about the situation."

Asked if the F1 row could see the manufacturers return to Le Mans, di Montezemolo smiled and replied: A Ferrari at Le Mans? Why not? If we should not race in Formula 1 anymore this would be an option: obviously not with a car with a diesel engine, but maybe with a hybrid, who knows.

"In this race you can really see the values of competition in the areas of sports and technology, but I have to say again that the life, the heart and the soul of Ferrari are with Formula 1," he added, the complete opposite of team founder Enzo Ferrari's attitude to endurance racing.

Looking at his team's 2009 season thus far, the Italian added: "This year, also because of the rules we can call "grey", it doesn't go too well, but we will never give up. Where we will be in 2011? For sure this situation will be resolved somehow: we will race in a Formula 1 with characteristics we want to keep or there will be some sort of alternative."