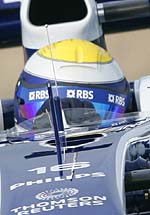 Ahead of today's sole free practice session, the air temperature is 19 degrees C, and the track temperature is 35 degrees. The sun is shining and there are noticeably far more fans present than yesterday.

Yesterday, Williams' Nico Rosberg was the pace-setter in both sessions, with cars using the under dispute diffusers filling six of the top seven places. The other big news here is that the Brawn GP cars are wearing Virgin signage following official confirmation of F1's worst kept secret in recent days.

The lights go green and Toyota leads the way, in his eagerness to get to work, Felipe Massa almost collides with Sebastian Bourdais. Just three minutes into the session, all but Raikkonen and the Brawns have been out.

As the rest of the field returns to the pits, Raikkonen heads down the pitlane. In the Brawn garage Nick Fry stands alongside Richard Branson, another photo opportunity for the former Honda F1 Team boss.

Shortly after Barrichello leaves the pits for his exploratory lap, Button heads down the pitlane to join him.

Fifteen minutes into the session, Glock, Piquet and Raikkonen (thankfully) break the deadlock and return to the track.

A 28.758 sees Alonso goes quickest, as attention switches to Rosberg and Button. The German goes third with a 28.953, while Button, who was fastest in the first two sectors, loses a heap of time in the third, finally crossing the line at 34.034.

There's consternation on the Ferrari pit wall as Raikkonen slows to a crawl, the Finn complaining that he's lost hydraulics. The 2007 champion pulls to the side of the track his session over.

A 27.782 sees Rosberg reclaim the top spot, however, he is almost instantly demoted by teammate Nakajima. Fisichella goes sixth, ahead of Massa, Trulli, Heidfeld and Glock.

Vettel goes sixth with a 27.982 but is demoted when Barrichello goes quickest with a 27.729. Teammate Mark Webber goes ninth.

As Raikkonen walks back to the pits, still wearing his helmet, Vettel goes quickest (27.284) as the Red Bulls continue to mix it with the diffuser dissidents. Kovalainen posts 29.336 to go eighteenth, leaving Sutil as the only driver yet to post a time.

Vettel improves to a 27.009, having gone quickest in the first and third sectors. Second placed Barrichello is 0.720s down on the German.

Kubica complaining again, not only is he suffering from a lack of grip (again), he's unhappy that another driver (Hamilton?) is leaving stuff on the track.

As Button goes second with a 27.068, Sutil is on a hot lap and about to post his first time of the day. The German goes sixteenth with a 28.650. Elsewhere, Kovalainen spins at Turn 4, but is able to continue.

Button improves to top spot with a 26.691 as Glock goes second, however, Barrichello is on a hot lap having gone quickest in the first sector. The Brazilian veteran goes quickest, crossing the line at 26.689. Next time around, Rubinho improves with a 26.489, as Piquet gets out of shape at Turn 1.

Trulli improves to fifth with a 27.130, meaning that both Toyotas are in the Top 5.

While Raikkonen is bottom of the timesheets due to the fact that he's out of the session, the Toro Rossos, Renault and BMWs are also worryingly off the current pace.

Vettel goes through the gravel at Turn 1, the German trying to improve on sixth. Teammate Webber remains ninth, 0.3s of his teammate's pace. Vettel has slowed, "something's broken," he tells his crew.