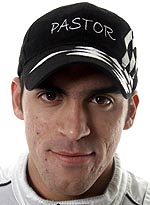 ART Grand Prix has announced a new partnership with Pastor Maldonado for the upcoming 2009 GP2 European Championship Season. As well as contesting the European season, Maldonado will also contest three rounds of the GP2 Asian series. He finished fifth overall in 2008 with one win, and sixty points to his credit. After suffering a lot of bad luck early in the season, things tuned around in the final four events where he scored more points than any other driver in the series.

During his time in the GP2 series, Pastor has secured two wins, 8 podiums and 3 pole positions and will be a very strong addition to the team as they work toward securing both titles in the 09 season.

Pastor Maldonado: I am very proud to be part of a team with the most titles and winners in the history of the GP2 Series and of course, I hope to contribute to winning the teams championship again as well as fighting for the drivers’ title in the new season. ART Grand Prix is a highly professional team combined with an environment which has great human qualities. We instantly got along together during testing and I am sure that it will be a great experience for both of us: let's learn from each other and make a great team which will be ready to fight for both championships.

Frédéric Vasseur: Pastor had an exceptional end to the 2008 season, scoring more points than any other driver and three time as many as the GP2 Europe champion during the last 8 races. There is no doubt he is one of the fastest and more complete drivers in the series. With his raw speed his experience of the series and his knowledge of the tracks it will make him one of the favourites for the 2009 championship. Pastor and the team got along really well during recent testing at the Paul Ricard HTTT circuit. All the lights are green and our aim will be to secure both titles next season.