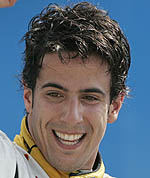 Renault test driver Lucas di Grassi believes he is in with a good chance of securing a full race seat with the French team next season, especially if Fernando Alonso should head elsewhere.

"If Alonso will go away, in my opinion it's difficult for the team to choose two inexperienced drivers," he told Italian website 422race.com. "Nelsinho as a first driver and a rookie alongside him... it's impossible for a competitive team to make such a choice.

"If Nelson goes away, maybe I'll have a chance," he continued. "Now we have to wait for Fernando and Nelson to decide. It doesn't depend on me, but on Flavio Briatore and the Renault team. I want to do my job, which is to win races and do good testing, then we will see. Renault still hasn't told me anything. They are happy about my GP2 results, much more than last year, but still they didn't speak about next year."

On his late decision to contest the GP2 Series - having missed the first three rounds he still finished third overall in the championship, giving Pantano a close run in the title fight - di Grassi said: "Two factors made me decide this way. First of all, this year the third driver was used so little, almost nothing, just six or seven days a year. For me it was very difficult to stay two months without driving and then do a good test. It was better to stay fit driving GP2, which is the closest car to Formula One, and then go fast with the F1 car by being more prepared.

"Secondly, I was invited to race for Campos, which is a team which wasn't going so well but in which I knew well what I could do. I decided to come back into GP2 to train for F1 and also to win races, showing to be the best driver of the category and to deserve a promotion."

In fact, di Grassi believes Piquet made a mistake in 2007 by not racing in GP2 opting instead to fully concentrate on his role as Renault tester. "After two or three races, you get the training back, but at the beginning of the year it was very hard for him," said the Brazilian. "I think to be fast is one thing, but races are races. You have to work on both sides. We racing drivers want to race, not just doing a fast lap in testing. It's not how we work. You have to work on pressure for the result and that's why I wanted to come back in GP2 to learn towards Formula One."