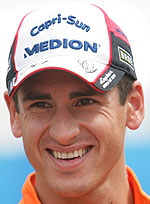 Ahead of today's opening practice session the air temperature is 22 degrees C, while the track temperature is 20 degrees. Following heavy overnight rain, and a further downpour a short while ago, the track is still very damp and consequently this has been declared a wet session.

The lights go green, and once again it is a Force India (Fisichella) which gets things underway.

"There's a dry line through the first chicane," says Coulthard, "however, it's wet at Ascari".

Five minutes into the session, Lewis Hamilton heads down the pitlane, leaving Barrichello, Raikkonen and Massa as the only drivers yet to appear.

Ten minutes into the session, the Force India are back on track, both drivers running on intermediates. Race Control advises that rain is expected within the next nine minutes, which seems pretty precise. Sutil gets things underway with a 1:37.402. Shortly after, at his second attempt, Fisichella improves with a 35.779.

With four minutes to go before the rain is due to arrive, Barrichello is the only man on track. The Honda driver goes quickest with a 35.374. Heidfeld is advised that the rain is five minutes away; "when it comes it last nine or ten minutes," he is told, "and it will be heavy".

Barrichello improves with a 33.428, but no sooner has he crossed the line than it starts to rain lightly, though only on the far side of the track. Nakajima is one of the first to suffer, the Williams driver spinning of onto the gravel. Luckily he is able to continue. Bourdais and Vettel, the only other drivers on track, head back to the pits.

The replay shows Nakajima went off after losing control and going on to the grass at the approach to the Roggia chicane. The car launched into the air as it clouted the kerb.

The Force Indias try another couple of laps, but as the umbrellas go up, Sutil and Fisi opt to join their colleagues back in the pits.

After a couple of minutes, Button (inters) breaks the deadlock, much to the delight of the fans in the stands. Wisely, he is extremely cautious, especially through the Parabolica.

When Button finally returns to the pits, his place on track is taken by Bourdais, the Frenchman one of only five drivers to post a time thus far. On his second 'flying lap', he gets it wrong at the first chicane, and has to weave his way through the giant polystyrene markers.

"This situation is as follows," booms the voice over Heidfeld's intercom, loaded with typical German efficiency. "The rain will continue until 11.15, which means it will be wet until the end of the session".

Realising that it is likely to be wet for the remainder of the weekend, Trulli and Glock get to work. Glock goes fifth (39.873), just ahead of his teammate.

Rosberg wants to go out, his team advising him the in these conditions - which are expected for the rest of the day - extreme wets are needed.

As Rosberg posts 39.011, Piquet spins, however the Brazilian continues, as teammate Alonso goes seventh with a 38.894.

Fifty-eight minutes into the track, Raikkonen heads down the pitlane, despite the rain, the crowd waves, cheers and blows the airhorns. However, the Finn can only manage 42.018, which puts him eleventh, of twelve. Next time around he improves to eighth with a 38.499.

Massa gets it all wrong at the first chicane, as his teammate improves with a 37.393 but remains eighth. The Brazilian posts 40.233, which puts him thirteenth, just ahead of Coulthard. Former Ferrari stand-in Mika Salo watches from the garage.

With fifteen minutes remaining, the rain is really hammering down, all twenty drivers are in their respective garages. Around the track, despite the lack of action, the fans appear happy, waving to the camera. A few seek cover underneath a section of the old banking.

It's almost monsoon like now, and with ten minutes remaining, we cannot see there being any further action.

Such is the intensity of the rain, the session is red-flagged with five minutes remaining. In the Ferrari garage Massa signs some caps for the official guests.