Massa aiming to concentrate on the future 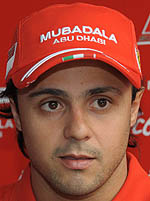 "I haven't yet forgotten Silverstone, although it was a weekend to be put in the files as soon as possible," admits Felipe Massa in his latest blog for Ferrari. "But weekends like that are part of racing. The goal is very simple now: concentrating on the future, which means the second half of the season. As I've said before, there's still a long way to go: everything can happen and the Championship is wide open. It's true that we lost precious points, which were in our reach, but we're still in a good position: I'm leading in the standings together with Kimi and Hamilton and the team has a good advantage in the Constructors' Championship. So you can't say that things are going too badly, quite the opposite!

"After Silverstone the team at Maranello worked a lot on many different aspects, such as improving the procedures at the track. I won't give you any details, because this is confidential information. But we know that we have to act to assure that certain mistakes won't happen again: this has to be one of our goals as of now until Brazil. I'm not worried about the criticism after the British GP. I've had lots before and it has never affected me, because I know what I have to do and what I want to do. The opinion of people from outside the team don't count for much, especially when they say one day you're a phenomenon and the next they say you're a failure: I don't let it influence me in either case.

"After the race I took some days off, before I took over from Kimi on the last day of tests at Hockenheim. The weather conditions were perfect, for once with summer temperatures and I think things went well. We drove many laps with the F2008, which was set up very well with both types of tyres on the short and on the long run. We know that we have a good car, very competitive, but we haven't used its full potential at the last race, mainly because it was a race under very special conditions. The test results are very encouraging for the upcoming weekend.

"We haven't raced at Hockenheim since 2006: back then I came in second behind Michael. I like this track, although I never raced on the old one with its long straights. I had some pretty good races there and in 2006 I was really fast: I hope that I'll be in the same position and maybe even make a step forward in the final result. There are some parts, which remind of Magny-Cours and there's always a great atmosphere, especially at the Motodrom, where you can feel the fans really close from inside the car. Now that there's only one race in Germany, it is a very important event for Formula 1 in general and, even if Michael won't be here for the first time, I'm sure that there will be lots of fans and we'll have fun. I'm sure Michael will be at the Ferrari box… although not for driving.

"I felt fine over the last days with my family at home in Monaco, but now I can't wait to race again and start the second hard and exciting half of the Championship the best way possible."