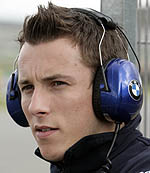 Christian Klien's determination to return to a race seat in Formula One remains higher than ever, the 25-year-old Austrian's desire boosted even more by his podium finish in last month's Le Mans 24 Hours where he raced for Team Total Peugeot.

The BMW Sauber F1 Team Test and Reserve driver raced in the Formula One World Championship for Jaguar and Red Bull Racing between 2004 and 2006, before joining the Honda F1 Racing team last season. This season Christian has been supporting team mates Robert Kubica and Nick Heidfeld in mounting the BMW Sauber F1 Team's most successful campaign to date.

"Naturally I want to race in Formula One and although I have never changed my motivation to race it has become even stronger since having the chance to race for Peugeot at Le Mans," said Christian. "I enjoyed that experience; to race a competitive car, to have the chance to win and to push all the time. I want to have the same experience in Formula One, and for sure the BMW Sauber F1 Team is my ideal choice. The team is working so well together, and the victory in Canada last month shows what can be achieved. There is still a lot of work ahead to become a consistent race-winning team, but the BMW Sauber F1 Team has that potential. Just in the same way as a team develops, I know I have developed also, and that makes me confident for the future."

Christian, whose best qualifying result in Formula One was 4th place at the 2005 Japanese Grand Prix and best race result was 5th in China that same season, arrived in Formula One at the age of 21 after winning the 2002 German Formula Renault Championship and the 2003 Marlboro Masters of F3.

"I arrived in Formula One very quickly and, four years later, with three years race experience and now two years working with Honda and the BMW Sauber F1 Team, I have learned a lot," said Christian. "I look at the drivers I raced in the lower formulae, including Robert (Kubica), and I know that with my experience and the support of a competitive team I can race well against anyone. I am very happy at the BMW Sauber F1 Team and people need to be reminded that I am not here only to test. I want to race, and sooner than later.

"What the BMW Sauber F1 Team has achieved in a few years is quite incredible, and a real credit both to BMW and also to the original Sauber team. A truly competitive team has been created very quickly, and I believe the future is very bright; I would expect that in 2009 the team will be able to challenge for more race victories and compete even more strongly for both the Constructors and Drivers World Championships."