Montezemolo calls on Mosley to stand down 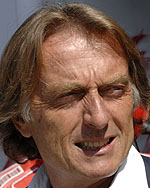 Although Ferrari has previously appeared to support Max Mosley in his battle to retain his role as President of the FIA, less than 48-hours after the Extraordinary General Meeting him which saw him retain his position, Luca di Montezemolo has called on the Englishman to 'do the decent thing'.

"I think that he should realize that sometimes it is necessary to say to yourself I have to leave for reasons of credibility," the Ferrari President told ANSA, the Italian news agency.

With Mosley not expected to stand down until 2009, two of the names being linked with the FIA presidency are 'Ferrari people, one being former team boss Jean Todt, the other being Marco Piccinini.

Previously, di Montezemolo had given his support to Mosley. At a time, just after the News of the World story broke, when all too many others were calling for the Englishman to stand down, the Italian eulogised the work of the FIA President.

"The day Mosley, for whatever reason, decides to leave, the FIA will need a leader with the same level of experience, competence, personality and balance," he told Gazzetta dello Sport at the time.

"If I look at what Max has done these years on the issue of safety, at the speed with which a verdict was produced in the spy story, and other stuff, my judgement on him can be nothing but positive. If he leaves, in his place we'd need someone like him."