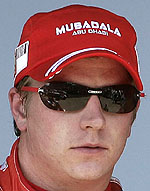 "They say the third time's the charm," writes Kimi Raikkonen, in his blog for Ferrari, "but I hope in our case it is the forth time to bring the result.

"I have finished third in three successive Grands Prix in Bahrain," he continues. "Time and again something has gone wrong. Sakhir is one of those circuits where I really want to win. Finally. Obviously, we should have speed enough to fight for the top place in Bahrain, too. I have a good touch with that circuit and Ferrari has traditionally been strong there.

"It is not easy to find the good set-up in that tricky track, but, at least, we had a very encouraging test down there in early February. I really like the Sakhir circuit, because it differs from the others. While going there, you feel like playing in the sandbox. It really feels like a gigantic sandbox. Where ever you watch, you see just sand. And you feel it, too - in your hair.

"I have had some good races in Bahrain, but no win so far. Testing in February went very well this year and I'm looking forward to racing in Bahrain again and to challenge for the win. Obviously we can improve from the last year. I was not satisfied with the balance then. Now it should be better.

"I have had a very good feeling since winning in Malaysia. Obviously it feels good to carry on the season. With our car we can expect that we can win in every circuit. I have been training at home and I also kept up my motocross skills in that great indoor track in Tallin.

"Now we are on our way to Bahrain to do our very best in third Grand Prix of the season. If everything goes our way, it will be a good result again. However, it is useless to promise anything beforehand. This is motor racing and what ever can happen. It is very early season still. Nobody knows exactly how their cars are.

"Obviously, our test in February does not harm us. But, of course, now it is different weather, different circuit and, obviously, our car is different, too. We have improved our car after the Bahrain test, so it should be better there. But the competitors are not far behind. All the teams know the place. That's for sure.

"Never mind the championship. It's much too early to make any kind of conclusions who is who. We have to wait some more races more to get the picture who are the main contenders for the title.

"It's going to be as tight as it was last year. That is for sure. Now it's the battle between three teams instead of two. Ferrari and McLaren have won the first two races, but let's not forget that BMW have had two

second places. So any slip up by Ferrari and McLaren and they will be there to pick up the points. This time you really have to fight for every point you get."