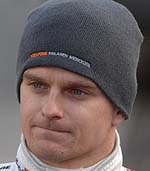 McLaren driver Heikki Kovalainen has admitted that the reason he was able to out-pace both Ferraris on Wednesday by more than 0.6s, was due to the fact that his team sent him out on low fuel in order that he could get a feel for the MP4-23 whilst running light.

Though he didn't want to claim any 'false glory', the Finn was keen to point out that the pace of the MP4-23 is fast, though he refused to make a prediction as to how it compares with the Ferrari.

We all know from experience that times mean little, though any team consistently more than 2s off the pace should be worrying. Of real significance, especially in light of the new gearbox rules this season, is reliability.