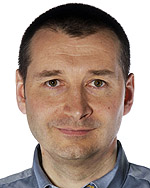 Following Jean Todt's claim that the fact that in 2008 all teams will be using a control ECU manufactured by McLaren Electronics a subsidiary of the Woking team, Renault's Engine Technical Director, Rob White (right), has admitted that he too fears the Woking outfit has an advantage, if only in the short-term.

"McLaren will enjoy an easier transition to this very different new system," he told reporters at Jerez. "Everything is different for us. The control system is different, all of the tools are different, the environment in which the engineers work is different. It has taken a huge amount of time and effort simply to understand the things that are different.

It's clear that McLaren were closer than other people to the system that we have in 2008. They haven't had to do the work necessary to adapt to this new system."

His fears were shared by former McLaren Technical Director, Adrian Newey, who now leads Red Bull's design team. "Renault has used a lot of effort simply trying to get their engine to run properly on the new ECU," he said, according to Reuters. "And of course as soon as you do that you are not putting the effort elsewhere.

"So it has been a slight disadvantage," he added. "I guess it has been the same for everybody except Mercedes."