Coulthard not alone regarding safety concerns 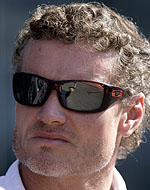 Having previously expressed concern that the banning of traction control this season will lead to accidents, particularly in the wet, Scottish F1 veteran David Coulthard has admitted that there are other F1 drivers who share his fears but not as willing to go public.

Speaking to reporters at Jerez, following the unveiling of his team's 2008 contender, the Scot said: "I'm not the biggest critic, I'm just prepared to express my opinion publicly. "When we have the drivers' meetings with race director Charlie Whiting, all of the drivers, even those who are not members of the Grand Prix Drivers' Association (GPDA), express the same concerns.

At 36 - going on 37 (in March), Coulthard is the oldest driver on the 2008 grid. A veteran of 228 Grands Prix, the Scot made his F1 debut in 1994 following the death of Ayrton Senna. In that time he has seen many changes, particularly with regards safety, and remains a leading campaigner within the GPDA.

"I've got no problem with not having traction control, engine braking and all of those things," he said. "I've raced when a lot of these guys that I'm racing against now were at kindergarten, and I was racing cars without those toys."

The Scot used last year's Japanese GP at Fuji as an example of the sort of catastrophe he fears. There, as has happened so many times before, even with traction control many drivers were merely passengers, unable to control their cars. While some say the race should have been delayed, or even abandoned, this would not go down well with race fans, who expect F1 drivers to be heroes, almost superhuman.

"There was clearly pressure for us all to race at Fuji and if we go there now without traction control, there won't be as many cars finish," added the Red Bull driver. "I can guarantee that."