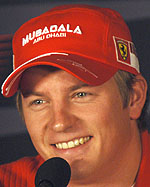 In the conference room of the Fiorano race track today, Kimi Raikkonen met the assembled accredited journalists for the presentation of the F2008.

They immediately asked him about things, which will be of huge importance, when the new season starts in Australia next March. Asked about his expectations for 2008 Kimi said: "We will definitely try to win the Drivers' and Constructors' Championship again. We have to see how the test sessions and the first Grands Prix of the season will go. The most dangerous competitors? McLaren will be there for sure. And then there's BMW. It will be a difficult year. It's my second year at Ferrari. I can feel that everything is going really well. I know the people I am working with and I really like the team."

There is a new car and the rules have changed a lot compared to the last season. What are his impressions behind the wheel of the new car and as far as the new rules are concerned? "We have already tested the new system before Christmas. There is no traction control anymore. And we have to adapt to this fact, which is quite something. There are also other control systems missing, which we were still using during the last year. But we are really satisfied with the new car and its modifications. The cockpit of the F2008 is tighter and also the car is smaller. We have to be ready for these changes."

As far as the competition is concerned, Kimi said that there could be major changes compared to the year 2007, when Ferrari and McLaren were ahead, as there are many teams with improved single-seaters this year. In the first races of 2008 one will see what surprises there may be.

Kimi was also asked if he might modify his driving style, because there is no traction control in the car anymore, which is especially important when coming out of the corners. Kimi said: "Without a doubt I'll become better. Because now I know what the team wants from me. But as long as you're not racing, you don't know what will happen."

As far as the personal security is concerned, after Kimi won his first World Championship title, he said: "I am not feeling too safe. I have waited for this moment for many years. Maybe this year will not be too difficult to get along. But I do not feel too safe. If I'll have more fun without the traction control? It will be much more complex to drive, that's for sure. Especially on wet tracks. But it will be also much more fun."

A journalist asked the Finnish driver what he expects from the future and from the upcoming season: "That's quite difficult to tell now. I have still two years left and if I go on having fun, I'll stay here. I really like Formula One and I have a brilliant team. We'll see. We want to start really well into a great season. We want to win again the world titles and we want to avoid retirements. This is the main feature to win against McLaren. That is how it was and that is how it will be in the future."

To check out our Ferrari launch gallery, click here