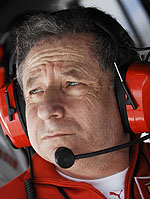 Talking to the German media, Jean Todt has revealed that following his retirement at the end of 2006, Michael Schumacher was offered the pole of Team Principal at Ferrari, an offer that the German declined. Todt also admits that in his opinion the seven-time World Champion was the ideal candidate for the role.

"Michael would have been the best candidate for this job, but he did not want it," Todt told Auto Motor und Sport. The job was subsequently given to Stefano Domenicali, who now has the official title of Sporting Director at Maranello.

Todt was also keen to make it clear that although former Technical Director Ross Brawn has now taken over the reigns at Honda, the Englishman would always enjoy a special relationship with his former employers.

"He is now a competitor, but he will remain a friend of Ferrari and myself," said the Frenchman, who further admitted that Brawn's move to Honda was the best move for all concerned.

"We spoke with each other for a long time, about what was best for Ferrari and what was best for him. But on a long-term basis, it was better for both parties that he went to Honda and we occupied the team boss position internally.

"He is a very good man," he added. "His successes with Ferrari speak for themselves."