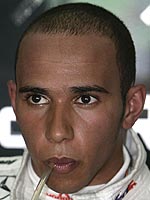 Just months after emerging as one of Britain's few genuine rising stars, Lewis Hamilton has threatened to quit Britain.

The English youngster is unhappy at media intrusion into his private life, claiming that some of the more outlandish reports in recent weeks have left him "devastated".

"I'm definitely contemplating living outside the UK," he told reporters on Sunday.

"I've always dreamt of living in London but it's becoming more and more difficult. Every time I go to London, cameras appear from God knows where.

"I can see from the experience of Fernando what can happen," he continued. "He's so big in Spain, he can't stay there because he can't go anywhere and live a normal life. I thought that wouldn't be the case in the UK.

"My whole holiday was in the papers," he said, referring to the recent articles. "I was trying to relax, but I couldn't swim, because the cameras were waiting to get 10,000 euros for the pictures.

"If I can't live a normal life and enjoy my life without being spread across the tabloids.. we'll just have to wait and see. It's down to the media, really."

Of course, one could be cynical and suggest that the other reason that successful people move out of Britain has more to with the tax than the tabloids.