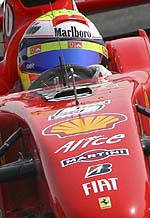 Ferrari's Felipe Massa was the quickest on the second day of testing at Spa Francorchamps.

Heavy overnight rain meant that the track was damp when the session got underway this morning. And though conditions improved throughout this morning, further rainfall in the afternoon meant that few drivers were able to improve on their earlier times, while the teams had to alter their programmes.

Massa continued with the work programme begun yesterday, which centred mainly on finding the best set-up for the car and on the development of new components. Due to the weather conditions in the afternoon, the Brazilian was unable to improve on the time he posted earlier in the day, however, this was still enough to keep him at the top of the timesheets. Kimi Raikkonen takes over tomorrow.

Over the course of the morning, as the track dried, the Woking team was able to complete its systems and set-up programme. The morning also saw the aerodynamic schedule concluded to positive effect, as the championship leaders focussed on components around the front of the car.

After the rain showers in the afternoon, the team focused on damper work. With further rain forecast for tomorrow and no possibility of an extension of the test to Friday, McLaren will prioritise the work for tomorrow overnight to make best use of the available track time.

Third quickest was Renault's Heikki Kovalainen as the French team continued its preparations for the Grand Prix in September, as well as pursuing the technical development programme for the coming races.

The Finn made the most of the dry conditions in the morning, during which he was able to complete a set-up programme, allowing him to find a stable handling balance with the car. Despite the rain in the afternoon, which disrupted the planned programme, the team made the most of the conditions to fine-tune the car's handling in the wet, which was all the more important because rain is often a factor at the Belgian race.

"I raced at this track in GP2 a couple of years ago," said the Finn, "but the first time in an F1 car is always a bit different, no matter which circuit it is. The car balance was good straight away, and I think we have a good baseline to work from at the GP weekend. We then tried to get the most out of the changing track conditions by working on tuning the set-up for the wet conditions, particularly focusing on the control systems. That was a good programme, and we found some interesting things. In spite of the changeable weather, I think we got the most out of the day, and the results were encouraging."

"The poor conditions certainly cost us track time today," admitted Christian Silk, "but it was important to prepare for the possibility of rain during the race weekend in September. We did different length runs, on different tyres, in different conditions to learn as much as possible. Heikki got to grips with the circuit revisions very quickly and was quite pleased with the car balance and handling. We will be looking to complete a busy day of work tomorrow with Giancarlo, our last day of this test, as we try and make up some of the time we lost today."

Ralf Schumacher ventured out onto the circuit shortly before 11 to begin the programme of work on the engine, coolers and other systems. Following the afternoon rain shower the team opted to do some wet running. However, there was too much variation in track conditions to allow any meaningful conclusions to be drawn. After yet another shower at 4pm the team carried out only a few practice starts to wrap up the day. The test concludes tomorrow with Jarno Trulli at the wheel.

"When it rains here like it did today it can be dry in one part of the circuit and wet in another," said Schumacher, "making it difficult to draw comparisons. Still, over these two days we've completed some positive work despite the weather. The car performed well overall so we can look forward to the race here with confidence. We were quick in Silverstone and this track has similar characteristics with a lot of high speed corners so it should suit us when we come here in September. The next race is at the Nürburgring, which is a completely different type of track, but we will obviously push as hard as we can to achieve a good result there too. Over the last few races I've become increasingly comfortable with my set-up and the whole team is working hard as we chase a successful second half of the year."

"It was a bit much to expect two rain-free days around Spa," admitted test team manager, Gerd Pfeiffer, "so today's weather came as no surprise. The track was damp in the morning so we delayed going out until the racing line was dry so as not to waste mileage. We eventually put in about 20 laps of work on systems in the morning before the rain arrived over lunch. As the afternoon progressed it became clear that the conditions would not improve so we decided to do some wet testing. Before long the track was wet in some areas and dry in others and that made it difficult to do any more productive work. On a day like this no one will have achieved a lot but we will hope for better conditions tomorrow when Jarno will complete the test for us."