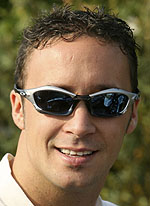 Andi Zuber (right) has claimed his long overdue first GP2 pole in blustery conditions at the Silverstone circuit today, pushing hard throughout the session as championship leader Timo Glock spun off on his outlap on fresh tyres while trying to outdo his teammate.

Zuber constantly improved his times, with his best lap of 1:28.043 grabbing pole with just a few minutes remaining in the session. The time was two tenths faster than Mike Conway and Lucas di Grassi could manage, despite last minute charges from the pair.

The conditions played a big part in the session today, with strong winds blowing the cars around and low temperatures obliging the drivers to push hard from the outset to get heat into their tyres.

Xandi Negrao and Vitaly Petrov were caught out by this in the opening minute, both men spinning harmlessly before rejoining the circuit. Bruno Senna, however, was less lucky: a big spin at Becketts saw the Brazilian slide through an advertising board before stalling his car, ruining his best chance of a strong time at the circuit he knows intimately.

Conway was the first man to set a sub 29 time, which was immediately improved upon by Glock before Zuber warmed up and put both men in their place. The pair pushed hard to get back on top, but a small off for the Briton and traffic for the German meant they were going to have to wait until their second set of tyres to post any improvement.

Glock was the first man back on track after taking on new rubber, but he pushed a little too hard on his outlap, spinning right in front of championship rival Luca Filippi, who was still on track after losing the first half of the session with a technical gremlin, and pulling up in front of the wall at turn seven.

The German was bitterly disappointed at the mistake, gesturing in vain to the marshals for a push, but his car was in an unsafe position and he was gently persuaded from his car, just as Andy Soucek spun harmlessly at the same turn.

It was the chance his teammate had been waiting all season for, and he pushed hard to stay ahead of Conway, who was equally determined to claim pole at his home track.

But when the clock ran out it was Zuber who was punching the air in delight, while Conway and di Grassi were left thinking of what may have been. Kazuki Nakajima, Timo Glock and Adam Carroll rounded out the top six positions, just ahead of Michael Ammermuller and Karun Chandhok.