Heidfeld on top in Bahrain (with pictures) 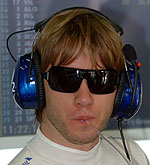 At a time when more and more F1 insiders are tipping BMW to be regularly fighting for points this season, Nick Heidfeld gave a timely reminder of the German car's obvious pace and reliability.

The German completed 104 laps of the Sakhir circuit today on his way to posting a best time almost 0.8s quicker than his nearest rival, reigning World Champion Fernando Alonso.

On a warm and sunny day, with periods of strong wind, Heidfeld was joined by Robert Kubica who started off by finding a baseline set-up as it was his first day of testing in Bahrain. The Pole then continued with further set-up work. Meanwhile, Heidfeld carried out the scheduled aerodynamic tests and did a qualifying simulation during which he set his fastest lap.

"Today was a good day," said the German, "we did a race simulation which was problem-free which was very satisfying for us as we had some technical problems in the winter runs, but today went well and the speeds seemed good.

"We have 3 more days of testing here," he added, "one tomorrow then 2 days off and 2 more days after that. It is the most important test for us as it's the last big test before the start of the season. At the moment the car is looking good."

Tomorrow, Heidfeld and Kubica will continue for the German team. The Pole will test new damper settings and different set-ups before he carries out another aerodynamic test, while the German will focus on tyre testing and then do an aerodynamic test.

Second quickest, 0.8s down on Heidfeld but 0.5s up on (third quickest) Button, was Fernando Alonso, who joined Lewis Hamilton. Both drivers continued the sign-off programme for the MP4-22 alongside an evaluation as to how the package fares in warm weather conditions.

For the second successive day, and despite voicing fears that the RA107 is off the pace, Jenson Button finished third quickest, albeit 1.33s down on Heidfeld. The Englishman was partnered by Rubens Barrichello, who finished ninth, over 2s off the pace.

Having set the pace yesterday, today was an altogether quieter affair for Ferrari with Raikkonen and Massa finishing sixth and eighth as they continued with the programme initiated yesterday, which includes long run tests, working on finding the best set-up for the car and electronics testing.

Heikki Kovalainen and Nelson Piquet Jr continued with the technical programmes begun yesterday. After working on endurance testing and race simulations during he first day, the two Renault drivers focused on set-up changes and tyre testing with Bridgestone. Although the drivers completed fewer laps than yesterday, they both completed their programmes without any difficulty.

"The track conditions were very changeable today because of the wind," said Christian silk, "but we adapted to it and adjusted the set-up of the car in order to complete our programmes. Our main focus today was on set- up, and once again we found plenty of useful directions. There is lots of data to analyse this evening so we can make more progress tomorrow."

"We had a busy day but managed to run through our full programme," said Kovalainen. We will be working on the data tonight with the engineers in order to make more progress tomorrow."

"I started my proper test programme today as we worked on set- up changes," added Piquet. "We tested a number of different ideas, and we are making progress every day. Hopefully, we can carry on the same way tomorrow for my last day of running."

For Toyota, Ralf Schumacher and Jarno Trulli set to work on long runs to cover more than a race distance, as well as tyre evaluations. The Italian again tried out the new aerodynamic package on the TF107 and in the morning collected plenty of useful data.

Schumacher had to wait before he could begin his session in earnest after a clutch issue early in the morning but he was soon back in action while his teammate was performing a series of long stints. Both drivers resumed the programme after lunch and put more miles on the new TF107, although minor repairs halted Ralf an hour before the session was due to end.

Franck Montagny replaces Ralf tomorrow for the final day before a short weekend break and then the second three-day test in Bahrain.