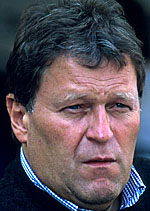 Responding to Flavio Briatore's recent dismissal of McLaren's championship hopes, Mercedes boss Norbert Haug has said that the Italian is most likely talking his own team up, secretly fearing the threat posed by the English team, which now has the added bonus of having two-time World Champion Fernando Alonso on board.

Speaking to Gazzetta dello Sport earlier this month, Briatore said: "It will be a tough year for them. I see them having problems.

"They've always had fantastic drivers like Raikkonen," he added. "They always announce them early to demonstrate they're changing, but this year the book of excuses has come to its last page."

Speaking in Birmingham earlier today, Haug said: "If guys like Flavio Briatore tell the world that McLaren has run out of excuses now that Alonso has joined us, then it shows he takes us seriously.

"We'll prove him wrong," he continued, demonstrating that contrary to popular belief Germans do have a sense of humour. "Maybe Flavio has mixed us up, after all, it was his team looking for excuses when the FIA banned their mass damper.

"Guys like Briatore should never forget what we did in 2005," Haug continued. "He was lucky, he did not beat us, we beat ourselves. I don't want to take anything away from Renault, but we clearly had an advantage."

Over to you Flav!