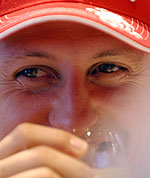 Just five weeks after he contested his last Formula One World Championship Grand Prix, Michael Schumacher has ruled out a return to the (F1) grid.

In his first official interview since the Brazilian Grand Prix, the seven-time champion told Sueddeutsche Zeitung SZ magazine; "Formula One is constantly changing. The technology, the engines, the rules, the circuits.

Schumacher's comments come at a time when there is (mostly internet driven) speculation that his former rival, Mika Hakkinen, could return to the pinnacle of motorsport, if only in a testing capacity.