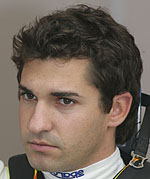 "This test drive was planned long ago but had to be postponed due to the hand injury that Timo sustained in the GP2 race in Monza," said Mario Theissen. "We have kept a close eye on Timo since his successful time in Formula BMW and are now keen to get a more accurate impression.

"Thanks to his successful performance in various race series, Timo was an obvious choice for the test drives," he added.

Glock made his F1 debut in 2004, with Jordan, contesting four races with the Irish team after Giorgio Pantano's money ran out.

The German's best result was 7th in Canada, his maiden race, following the disqualification of the WilliamsF1 duo of Ralf Schumacher and Juan Pablo Montoya, due to the illegal brake ducts on their cars.

Glock will test for BMW at both Jerez tests in December.