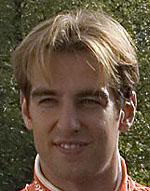 A1 Team Netherlands is set for the battle with 23 other countries during the opening race of the new A1GP season at Circuit Park Zandvoort. With the first official practice sessions scheduled for tomorrow the team is working hard to get good result straight from the start. With Jeroen Bleekemolen (right), who can count on tremendous support for his first real test in the A1GP.

With more then 100,000 spectators expected for the entire race weekend it promises to be a true racing feast. A1 Team Netherlands can count on massive support in the battle for a good result.

For A1 Team Netherlands driver Jeroen Bleekemolen it's his first race in A1GP. Jeroen, who lives in Aerdenhout near the circuit, knows every corner of the Zandvoort circuit and is really looking forward to get behind the wheel of the bright orange car and set a good basis for the rest of the weekend.

Jeroen Bleekemolen: "I am really looking forward to this. For me this is of course a huge chance to show something. I have not driven the car for a long time, but my knowledge of the circuit is very good, that's very positive. We will just do our very best and all the spectators who will come only helps", said Jeroen who received a lot of positive reactions on the news that he will drive for A1 Team Netherlands this weekend. "I have had an unbelievable amount of reactions, all day through yesterday and today. The support is just enormous and that's very nice".

A1 Team Netherlands Team principal Jan Lammers expects a true spectacle for everyone this weekend and a real feast on the circuit which is like his second home. But Lammers wanted to clarify on some matters surrounding the break up with Jos Verstappen. "First of all I want to make clear that we have paid Jos every single eurocent that we owed him. There are some different stories about this circulating on the internet and in magazines, but this is no subject for discussion. After all the discussion about Jos we almost forget that Jeroen Bleekemolen should well capable of producing some good results. We now have to concentrate on the performance of A1 Team Netherlands. The moral within the team is very good. If everything is ok, the team should pull together in these situations and that's exactly what they did. Everyone is disappointed or surprised in their own way that Jos did not accept our proposal. There are people who are willing to do this for free and are even willing to sweep the dunes for this opportunity. A lot of people are very surprised about why he does not want to be here. Certainly we as A1 Team Netherlands, the A1 organisation and also the other people we have contact with and who were willing to provide guarantees are very surprised. That proved to be insufficient. We are just dazzled. You have such a good team, in such a nice country, a magnificent series on a perfect location. We are really surprised about this one", said Jan.

"I have always said that the A1GP has a lot of followers. The people who have asked for a refund because Jos is not driving are no more than halve a percent of all spectators and you can neglect such numbers. On the other hand ticket sales are still continuing at a 100 tickets a day. We are of course very pleased about that development and I am sure that all the motor sport enthusiasts who will come, even if they have a bitter aftertaste, will go home on Sunday evening with a good feeling about the show we provided. Finally, let one thing be very clear. When I set up A1 Team Netherlands, I was the first one to call Jos because I wanted him in the car. Now there was a car with his name on it, a team and everything else waiting for him to go racing. We had the funds positioned to pay him. We did also provide solid guarantees with that. The guarantees that were demanded we found to be completely out of proportion. They found our proposal unacceptable and that was end of story. We have had offers from people willing to help us out with the guarantees, but we just did not find that reasonable. It just went too far". "The people who will go home on Sunday will surely see a fantastic spectacle, to our surprise without Jos. But there are more racing fans then Verstappen fans and hopefully Jeroen can provide the results. Jos became known through his results and it would be nice if Jeroen could take the same road".

The A1GP season was kicked off today in Amsterdam. Jeroen Bleekemolen drove the A1GP World Cup of Motorsport car in the hart of Amsterdam, in front of City Hall, watched by amongst others the mayor of Amsterdam, Job Cohen, the deputy mayor of Zandvoort and Hans Ernst, director of Circuit Park Zandvoort. Directly in front of the entrance Jeroen set his signature in rubber on the Amsterdam pavement." This was really fun to do, driving a racing car in the middle of Amsterdam. We did not announce it but when the engine was fired up, it immediately became more crowded. A very different experience for me".