Verstappen out - Bleekemolen in, for Netherlands 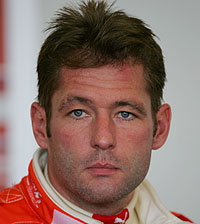 Jos Verstappen is out and Jeroen Bleekemolen is in, as A1 GP Team Netherlands issues the following press release, less than 72 hours before the start of the 2006/2007 season, and the team's home race at Zandvoort:

A1 Team Netherlands and Jos Verstappen had already agreed on most of the details for the upcoming A1GP season, but yesterday evening Huub Rothengatter, Jan Lammers and Bruce Holmes, A1GP CEO, did not succeed in closing the deal.

The biggest breaking point proved to be a guarantee that was demanded by Huub Rothengatter on behalf of Jos Verstappen. Huub's argument was; "We want to avoid the hassle of last year. Jan Lammers responded with the following question; "Huub, explain to me. Do you mean hassle with the fact that Jos is popular again, has won a race and has close to 1 million dollars in his bank account?. What followed was an evasive answer. Jan then asked; "Huub, what would you rather do, another season like last year's, or don't drive". Huub's answer was very clear; 'don't drive'.

Yes, there was a delay in some of the payments and yes, everything has now been paid. Almost 1 million dollar.

Now the Verstappen side demanded a guarantee from A1 Team Netherlands and /or the A1GP organisation. Bruce Holmes reacted to this by stating that the contract between Verstappen and A1 Team Netherlands should be the guarantee and that A1GP was willing to co-sign or provide the guarantee as an organization. This was not enough though for Huub Rothengatter and even a direct phone call from Bruce Holmes to Jos could not change their minds .

Jan Lammers: "I feel really bad about the situation and it is awful for the fans of Jos, but we have to be straight here. This is also Jos and if you are a fan of Jos you also have to be a fan of Huub Rothengatter. Last year I was the first one to call Jos to get him into the car and we all benefited from that. But we also need enthusiasm and passion, now it's too much and only about the money".

"Our focus for this moment is on trying to achieve the maximum performance in front of a big crowd . We still want to put up a great show as A1 Team Netherlands. That's the difficult task that our reserve driver Jeroen Bleekemolen is facing right now, but we have a lot of faith in Jeroen's capacities. It wouldn't be the first time if he wins a race at Zandvoort".

"The Circuit Park Zandvoort is in top condition, we will miss Jos, but nevertheless we expect a good weekend.