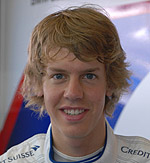 BMW has confirmed that German 'hot shot' Sebastian Vettel will be its third driver in all three remaining rounds of the 2006 World Championship season.

Since being promoted to the third driver role, following the team's decision to replace Jacques Villeneuve with Robert Kubica, Vettel has greatly impressed, being fastest in three of the four Friday free practice sessions he has contested.

With 3 rounds of the 2006 Formula 3 Euro Series remaining, including this weekend at Barcelona, Vettel, who drives for the ASM Team, is 12 points behind championship leader, Paul di Resta.