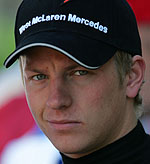 There are reports appearing in various European news outlets, some reliable, some not, that Kimi Raikkonen has agreed terms with Ferrari for 2007 and that a deal has already been inked.

In Spain, Fernando Alonso's former manager, Adrian Campos, is quoted as saying that he is "certain" that Raikkonen is leaving McLaren at the end of the year, while Stuttgarter Zeitung quotes Michael Schumacher's manager, Willi Weber, as knowing nothing about the deal.

More, including the truth no doubt, will be revealed in the days, weeks and months to come.