We exist to win, says Dennis 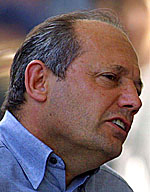 With four wins to his team's credit this season, including a famous 'home' win at Silverstone, Ron Dennis has thrown down the gauntlet to his rivals at Renault. McLaren can win, he believes, and it will do all that it can to do so. However, for the time being, the aim is to take each race as it comes.

"We are focussed on each and every race," said the Englishman, "we are not worrying about the championship at the moment, we are just going to every race to try and win it.

"To win this championship, and of course there is a mathematical possibility of us winning, we have to win (races) and to a certain extent our primary competitors, which is the Renault team, only have to come second so the task for us is to win," he continued. "We are not getting into any form of mathematics or any consideration about strategy, we just come focussed to win and that is certainly how we are going to finish out the season, irrespective of if and when the championship is decided. We are a Grand Prix team, we exist to win, so that is our approach to every race.

"We have a very strong car-engine-tyre package at the moment," he added, "so it is probably up to us to determine the limits to which we push the equipment and, of course, to win we are going to have to push it to the limit. I think reliability is the challenge for us, whereas maybe with Renault, certainly Alonso, they can play a little bit more of a cautious game to get the finishes they need to win the world championship. I am sure given a reversal of the situation we would be doing exactly the same. We are under no illusions. While winning is great, they don't have to go 100 percent, they can go a little bit off that and that enhances their reliability. It would be interesting if we could get them under pressure, that would be the best thing for Formula One, not necessarily for Renault but certainly for us, just try to get them under pressure."