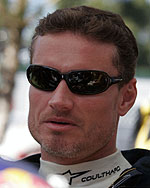 No that isn't a typo, Red Bull star, David Coulthard, is hoping to be a paddock bum in Monaco this weekend.

The Scotsman has promised - though nobody is quite sure why - that if he finishes in the top three on Sunday, he will drop his trews and reveal his bottom.

"I'll drop my trousers and show my backside in the paddock if I get on the podium," Coulthard told reporters in Monaco on Wednesday. "I'm not building my hopes up too much. But if I could get a podium finish here it would be a fantastic achievement for me and the team... well worth baring all for.

"On paper, we won't have the same pace as the top teams," he admitted. "We did a great job at the start of the season but we just don't have the investment. The bigger teams have made loads of improvements while we still have the same car and engine we started the year with.

"Part of me wishes that I could be going for pole and victory like I did with McLaren. But I also enjoy doing a good solid job with Red Bull. A podium finish with Red Bull would feel just as fantastic as the two wins I've scored here."

Although it is unlikely that we'll see DC on the podium, far less making an arse of himself, it should be remembered that Eddie Irvine got the Jaguar into third place in 2001, the Milton Keynes outfit subsequently bought out by Red Bull.

Coulthard also took the opportunity to take a minor swipe at the man who inherited his McLaren drive, Juan Pablo Montoya: "Under the circumstance I think I did a solid job at McLaren," he said. "My replacement has not done a significantly better job, which validates me."