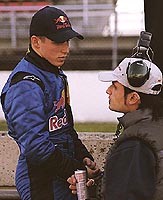 Red Bull has confirmed to Pitpass that it is seeking support from rival teams for a change to the rule whereby drivers who have taken part in six Grands Prix (or more) in the previous two seasons are ineligible to drive the third car during the Friday morning free practice sessions.

It's widely believed that McLaren's Ron Dennis was responsible for the introduction of the rule in 2004, as a means of preventing teams taking part in the sessions from gaining any further advantage in addition to the mere fact that they are able to run a third car in the first place.

Ironically, having finished outside the top four in 2004 this meant that McLaren is able to run a third car in 2005.

With Tonio Liuzzi scheduled to drive at Imola, and the next two races, under the present ruling Christian Klien is ineligible, which means the Austrian outfit must seek another driver.

It's understood that team boss Christian Horner is already soliciting support from other team bosses for a change to the rule, with BAR and Renault apparently having already agreed to give their support.