Coulthard apologetic after clash with Villeneuve 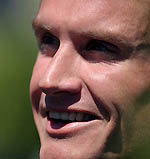 It's Sod's law that just when under-fire Jacques Villeneuve looked set to grab a point, and thereby put the rumour-mill on hold, the Canadian should be forced into retirement following a collision with a mate.

The incident happened when Villeneuve and David Coulthard were lining up to pass Rubens Barrichello who was struggling in the new Ferrari F2005.

They made their move, but something went wrong and 'bang', the Sauber driver's race was over, leaving him warning that he would "have words" with his Scottish buddy.

"It was only another lap and I would have passed Rubens," said the 1997 World Champion last night, "but then I got hit by David. I don't know why and I'll have to ask him...

"After that I could feel something wrong at the back of the car," he continued, "so I came into the pits so the team could check it out. They subsequently discovered that there was damage to the rear suspension where David had hit me. It's disappointing to get so close to a point and then lose it, but I'm feeling a lot more confident in the car after this race."

Talking to British tabloid The Sun, DC was filled with remorse: "I went for it but touched Jacques and spun him round," he admitted.

"It was a racing incident. We are mates and I went to see him afterwards as I am getting a lift on his plane and wanted to make sure I was still welcome."

Since there are no overnight reports of a Scot being thrown out of a plane by an irate Canadian, we can only assume that the duo reached an agreement.

Ironically, DC recently suggested that Villeneuve might walk away from unless F1 unless he started getting decent results.