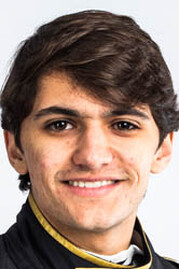 Carrying one of motorsport's most revered names, Pietro is laying the foundations for his own push at racing greatness.

Grandson of two-time F1 champion and double Indy 500 winner, Emerson Fittipaldi, the Miami-born Brazilian rose through America's karting ranks from 2006 -10 before making his debut in stock cars in 2011, where he was crowned champion and ‘Rookie of the Year' in the NASCAR Whelen All American Series for Limited Late Models.

A move to the Late Models category the following season earned another ‘Rookie of the Year' title for the Brazilian.

He graduated to the FIA Formula 3 European Championship in 2016, scoring three podiums, and raced in the MRF Challenge Formula 2000 Championship, winning the series courtesy of four victories from nine podium finishes.

Another title followed when he won the Formula V8 3.5 Championship in 2017 with six wins, 10 podiums, and a series-record 10 pole positions.

Having competed in April's IndyCar Series event in Phoenix with Dale Coyne Racing, Pietro's 2018 race program was curtailed after breaking both legs in an accident in May's World Endurance Championship 6 Hours of Circuit de Spa-Francorchamps.

He returned to his IndyCar commitments at the end of July, making five more starts with a best finish of ninth place at the Grand Prix of Portland in September.

In mid-November, Pietro was announced as test driver for Haas, the youngster subsequently making his debut with the American team at the post-Abu Dhabi test.

In addition to two outings in the VF-19 in pre-season tersting, Pietro drove the car in the post Bahrain and Barcelona tests, as well as the test in Abu Dhabi.

Outside his duties with the American F1 team, Pietro contested DTM with Audi, his best result coming at Misano with Team Rosberg, where he finished 5th.