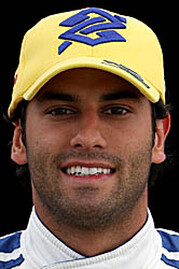 Winning the SuDam Junior Championship and Brazil Cup in 2007 finally saw him turn his attention to single-seaters in 2008, the youngster making his debut in the final round of the Formula BMW Americas series at Interlagos - supporting the Grand Prix - Felipe claiming a podium finish in the second race.

For 2009 he chose to contest a full season of Formula BMW Europe and a coupler of rounds of the Formula BMW Pacifc series. In Europe he finished 14 of the 16 races in the top two, winning 6 race and taking 5 pole-positions on his was to securing the title.

As part of his prize for winning the title, Felipe - who succeeded Esteban Gutierrez as champion - was due to test a BMW F1 car unfortunately that fell through when the German manufacturer withdrew from F1 at season end.

He stuck with F3 in 2011, this time with Carlin Motorsport. From 30 races there were 7 wins, 17 podiums, 5 pole positions and 9 fastest laps, Felipe taking the title - won in 2010 by Jean-Eric Vergne - with a 123 point advantage over teammate Kevin Magnussen.

That same year, winning the Sunoco Rolex 24 at Daytona Challenge - a joint racing programme series in the UK for users of Sunoco fuel - meant that Felipe was entered in the legendary Rolex 24 at Daytona the following year (2012)... he finished third!

2011 also saw him return to Macau, where he finished 11th in 2010, this time around he finished runner-up to Daniel Juncadella.

For 2012 he made the obvious move up to GP2, signing with DAMS. With the backing of sponsors such as Banco do Brasil, Felipe could only manage 10th overall, his best results being a 2nd in the second race in Belgium and a 4th place in race one of the German round.

That said, teamed with Davide Valsecchi, who won the championship, Felipe's tenth place in the standings helped DAMS win the teams' championship. With four podium finishes, he was the second highest-placed rookie overall, behind James Calado.

He remained in GP2 in 2013 but switched to Carlin, partnered with Jolyon Palmer. Though there wasn't a single win, four seconds and six further visits to the podium saw Felipe finish the year fourth overall, just three points down on third placed James Calado. His teammate, who did win two races, finished a distant seventh.

Tipped as Brazil's next big thing, Felipe, whose uncle Amir Nasr owns one of the most successful South American F3 teams, having helped drivers such as Helio Castroneves, Antonio Pizzonia, Luciano Burti, Bruno Junqueira and Cristiano da Matta, on their way, signed as test and reserve driver for Williams on 22 February 2014, getting his first taste of the FW36 just a few hours later.

Other than the first and second tests in Bahrain, where he finished 4th and 10th overall, Felipe drove the FW36 in FP1 in Bahrain, China, Spain, Austin and Brazil, as well as the post-season test in Abu Dhabi.

Alongside this he gave a good account of himself in GP2, winning four races on his way to taking third overall in the series behind former teammate Jolyon Palmer (DAMS) and Stoffel Vandoorne (ART).

Nonetheless, rather than continue with Williams it came as some surprise when, on 5 November, Felipe was named by Sauber as its second driver alongside Marcus Ericsson.

Arriving in Melbourne, the Swiss team was rocked by a legal challenge from Giedo van der Garde who insisted that he had been guaranteed a drive. The matter was subsequently dealt with, the Dutchman apparently paid handsomely for his disappointment though he is unlikely to ever drive in F1 again.

The rest of the weekend was a whole lot better, rookie Felipe putting his car 11th on the grid, despite missing the opening practice session - a result of the Van der Garde legal challenge. Next day, a superb drive saw the youngster finish fifth, bringing back echoes of Mark Webber in the Minardi.

Alongside points in China, Monaco, Singapore and Austin, there was another decent haul in Russia, Felipe taking full advantage of some canny tyre strategy,

Sadly, that was as good as it got. Updates were few and far between and the Swiss team was not even 'best of the rest', rather 'just ahead of McLaren and Manor'.

Ignoring the fact that he entered F1 in the same season as Max Verstappen and Carlos Sainz, one wondered whether, had these two not been on the grid, Felipe would have done enough to merit 'rookie of the year'.

Whilst there were a number of technical failures, Felipe only had himself to blame for his crash in Canada and the unforgivable collision with his teammate in Austin.

Retained for 2016, as was Ericsson, Felipe, aware of the team's financial issues, which meant it would be effectively fielding the 2015 car, still had the opportunity to shine. Sadly he failed.

The opening races saw the Brazilian constantly complaining about the balance of his car, consequently, despite the cost involved, for the fourth round he was provided with a new chassis. Though happier with the new car, which allowed him to out-qualify his teammate for the first time, this wasn't generally reflected in his results.

In Monaco, clearly sick of the obvious bias within the team towards his teammate, Felipe chose to ignore the order to allow the Swede through. Eventually Ericsson took matters into his own hands with the obvious outcome - both cars eliminated.

While the Brazilian suffered a couple of technical issues for the most part he was simply out-performed by Ericsson both in qualifying and on Sunday afternoons. The question we asked ourselves was, 'where was the Felipe of 2015?'

With the team desperately needing points in order to leapfrog Manor and thereby claim a stake in the prize pot, Ericsson always looked the more likely to do the business and on a couple of occasions came tantalisingly close.

In Brazil, where the weather conditions ensured anything might - and would – happen, Ericsson looked certain to open the team's points tally until he spun off into the barriers. Felipe, courtesy of a determined, sensible drive, and good strategy calls from the pit-wall, brought the C35 home in ninth to give the team its only points of the year.

In truth, neither driver impressed, but courtesy of his connection to the team's new owners Ericsson gets another year in which to prove himself.

Felipe, on the other hand, looks as though he's blown his chance. While his cause wasn't helped by the withdrawal of sponsor (Banco do Brasil), the fact is the youngster simply never impressed, never grabbed the opportunity.