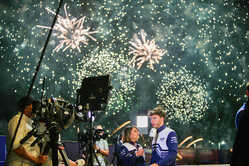 Much of the media has picked up on a report claiming that Saudi Arabia’s sovereign wealth fund considered a $20bn bid for F1, but owners Liberty Media were not interested in selling.

Fact is that until recently Liberty had indeed been looking to sell the sport, but with the success of Drive to Survive and the resultant "boom", the American media company believes it has discovered the proverbial goose that lays golden eggs and is therefore not so keen to sell.

On the other hand, and we have this from an impeccable source, the potential buyer, Saudi Arabia’s Public Investment Fund (PIF), which among other things, owns Newcastle United football club and is behind all manner of projects including LIV Golf, had a little sniff but nothing more.

Indeed, we understand that the top echelons of PIF were not even aware of the interest being shown in F1 by those lower down the food chain, who, other than seeing the sport as a good investment - though no figures were mentioned - believed things could be improved by putting Bernie Ecclestone back at the wheel.

As it is, Bernard Charles, who is currently charged with hiding £400m from the UK taxman - a clearly trivial matter since it is isn't mentioned once in the eight episodes that comprise the recently released documentary on the man - has shown no interest in returning.

Of real interest however is why this story, devoid of sources far less quotes, has appeared in the first place.

With the announcement of the launch date of season 5 of Drive to Survive appearing to suffer a similar level of indifference to that shown by the sport to Andretti, some might feel the bubble is about to burst.

Indeed, talk of a $20bn bid for a sport that cost just $4.4bn in 2017 - and which saw tracking stock jump 7% on Friday in the wake of the report - has all the smoke and mirrors hallmarks of its former boss.