Almost one hundred years after its motor racing debut, Maserati returns to motorsport.

When one thinks of Maserati in terms of motorsport, one generally thinks of the fabulous 250Fs of Juan Manuel Fangio and Stirling Moss.

However, over the years the Modena-based company, which originally began life in Bologna, has contested GT racing, Sports Cars, Touring Cars and even Rallying.

Now, almost one hundred years after making its racing debut, the iconic Trident returns to the grid as it enters the 2022–23 Formula E World Championship, thereby becoming the first Italian manufacturer in the series.

On Tuesday, the company unveiled its Formula E contender, the Tipo Folgore Gen3, a nod to the original racer, the Tipo 26 of 1926, and its current range of electric vehicles.

"The Maserati trident is naturally prominent on the nose cone along with the Maserati Corse logo," said CEO David Grasso. "The first racing car to bear the trident logo was the Tipo 26, which debuted in 1926 at the Targa Florio, finishing first place in its class with Alfieri Maserati at the wheel.

Unveiled on the streets of Modena, the Folgore is the ultimate in "electrifying high performance, efficiency and cutting-edge technology that will ‘Race Beyond', a platform to transfer innovation from circuit to road", according to the press release.

The new livery for the Folgore has been created to give a contemporary and pure look, the Trident is naturally prominent on the nose cone along with the Maserati Corse logo containing the Italian Tricolore sitting either side of the bulkhead. 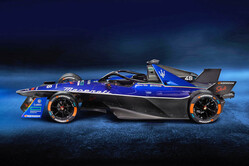 The Gen3 will be the fastest and most efficient Formula E car yet, with front and rear powertrains delivering 600kW of regenerative power and 95% power efficiency allowing for more than 40% of the energy used within a race to come from regenerative braking alone. The track expertise, technology and software used in Formula E is a key part to this competitiveness and will transfer to Maserati's high-end road cars with the imminent introduction of its Folgore range.

The Folgore will soon head to Valencia for pre-season testing before taking to the Autodromo Hermanos Rodriguez City in Mexico City,14 January 2023, to commence the 17-race calendar.

"Unveiling the Maserati Tipo Folgore today is a testament of our audacity, that reignites our competitive spirit and our commitment to race beyond," said Giovanni Sgro, the Head of Maserati Corse.

In its previous guise, Venturi, the team won four wins in the 2022 championship, and James Rossiter, who has taken over from Susie Wolff, has every faith in drivers Edoardo Mortara and Maximilian Guenther.

"The prestige of Maserati and the experience, success and diligence of MSG (Monaco Sports Group), we believe we have a winning combination," said Rossiter. "Now our focus returns to pre-season preparations and after a promising private testing phase, we need to maximise every minute of track time in Valencia.

"At this stage, it's very difficult to make any predictions, but with a competitive package and Edo and Max behind the wheel, we're confident that we can have a successful season."