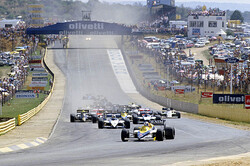 F1 boss, Stefano Domenicali admits that the sport is targeting a return to Africa, claiming that neither Kyalami or indeed South Africa is the only option.

When the World Motor Sport Council recently confirmed the record schedule for 2023, many were disappointed to see that South Africa hadn't made the final cut despite widespread speculation that a deal was close to being done.

Seemingly 'pencilled in' for 2024, F1 is aware that without a race on the African continent it can hardly be called a world championship, and speaking recently, F1 CEO, Domenicali admitted that taking the sport back is a clear target.

"We need to make sure when we do something new, that it has to be with the right partners and be stable fundamentals to stay longer," he told Sky Sports.

"It would be wrong to go there one year and then disappear if the conditions aren't done properly," he admitted.

"It's a matter of having the right financial assets, but also having the site ready for the weekend that we want to host in that place.

"The only thing that I can say that after the first contact with Kyalami is that there are other places in Africa that are interested on Formula One," he added. "That's a very clear target.

"Africa will come back and hopefully very soon on our calendar."

Following the Azerbaijan Grand Prix, Domenicali headed to South Africa to continue the negotiations that it was hoped would see F1 return there for the first time since 1993. The country's absence from the '23 calendar suggests those negotiations were not fruitful.

One driver keen to see F1 in Africa is seven-time world champion, Lewis Hamilton, who, when asked in 2020 where he would most like F1 to race, was in no doubt. "Easy," he replied, "Africa. It's such an important place to go back to.

"It needs to be held where it's not all about money," he said, "it's about people, and in business that's not always the case, so that's something I'm pushing for."

While Africa goes without, the US will host three races next season.

"The signals that we are receiving are incredible," said Domenicali "A couple of years ago we were thinking do we need to keep fighting to stay there and invest, but now there is an incredible sign of boom. It's impressive.

"For sure it is a market where a lot of resources will be dedicated, but we need to respect a lot of the regions around the world and there is a lot of attention everywhere."