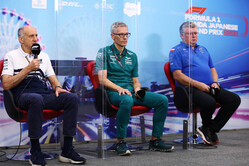 Q: Otmar, please can we start with you? Some very exciting news has just broken. Pierre Gasly is joining Alpine as of 2023. Let's talk about that. First of all, why Pierre?
Otmar Szafnauer: Well, we had, as everyone knows, we had a seat available around the summer break, and then we started looking around as to who would be a best fit, and we had some criteria to work to. And the three things we wanted was naturally speed: a fast driver; one with experience and also youth at the same time. Adding all three things up, there aren't many people that have all that and Pierre definitely does. We thought he was a great fit for us. So, we put him on our shortlist, and then went about getting it done.

Q: How soon after Fernando Alonso announced his departure did you start talking to Pierre?
OS: It was maybe a week or so. Not even. I mean, shortlist first. When it looked like Oscar wasn't 100% certain with some of the contractual issues that we had, then we started working on a shortlist of who else it could be, and Pierre was on it.

Q: And how do you feel Pierre is going to complement Esteban Ocon?
OS: They've known each other for a very long time, and they've raced together. And I think it'll be, you know... they're about equally experienced, they're both very fast, both ambitious. So I think they'll work well together.

Q: Now, you mentioned Oscar a minute ago, but where does the deal with Pierre Gasly leave the likes of Jack Doohan. Will we see Jack doing some FP1s before the end of the year, for example?
OS: Yeah, we haven't quite decided that but Jack is part of our programme. And he's close to the team and there'll be a future for Jack with the team and that will soon be sorted. But we focused on this first.

Q: And Otmar, how much of a relief is it to have everything sorted?
OS: It's great going forward. This is for next year. So, we still have this year to focus on, which we need to do. We need to do a good job. But it's good to know that next year is sorted, and then we can get on with this year, and also prepare for next.

Q: Franz, could we come to you next, please because you are losing Pierre, and you're gaining Nyck de Vries. First, why have you chosen Nyck as Pierre's replacement?
Franz Tost: Because he's fast. I know his history. I saw him in karting, he won, I think it was 2010 and '11, the European and the World Championship in karting, and then he was really successful. In all the categories where he raced. He won in Formula Renault, he won in GP3, he won in Formula 2 and also he won the Formula E World Championship, and therefore I think he is a very high-skilled driver, and he deserves to be in Formula 1, and we are really looking forward to having him in our car.

Q: How much of an influence did his superb debut at Monza last month have on your decision?
FT: This had a great influence because it showed his potential. He drove a fantastic race, did not make any mistakes. And therefore, it was an easy decision to take him.

Q: And what is the plan with Nyck, between now and the start of next year? Could we see him do some FP1s for you prior to the end of the season?
FT: I don't think so because he still has a contract with another team. I hope that we can see him in Abu Dhabi in the Young Driver Test.

Q: And a quick word on Pierre. He's raced for your team for four and a half years. How do you sum up his contribution and how much will you miss him?
FT: We will miss him a lot because Pierre put a lot of effort into the team and he brought the team forward. We had a very successful time together, not only the win in Monza but also his podium finishes in São Paulo or in Baku, and he's a good character. He is a fast driver. He is very professional. And I can only say thank you to him for his superb job with us and wish him a successful future.

Q: Mike, thanks for waiting. Can we start with Nyck de Vries before we come on to all matters Aston Martin, Nyck drove in FP1 for you at Monza. Tell us, tell Franz what sort of a job he did, and what stood out for you.
Mike Krack: He did what we expected from him, and what could have been expected. I'm quite happy for Nyck that he has secured a job. He's not only a very good driver, but also a very nice guy. So, I can only congratulate Nyck and also Franz for this signing. When he worked with us, it was very professional, very easy to work together. And in this one session, it was the same as when he did the race for Williams. So, without any mistakes, he did what we asked him to do. And yeah, all in all, very good.

Q: Let's bring it on to Aston Martin now. You come to Suzuka on the back of a strong weekend in Singapore. P6, P8 in the race there. You've jumped ahead of Haas and AlphaTauri in the Constructors' Championship in the process. How good is the car now? And how confident are you of maintaining that form here at Suzuka?
MK: Well, the car has improved, obviously. but Singapore is also a little bit special. There's not many high-speed corners and we have seen we have had weaknesses in these kinds of areas. So, I would be surprised if we can repeat the same performance here. But we will try as much as we can. And we need to be realistic because, yes, we have jumped in the Constructors', but it could also jump the other way around very quickly. Double DNF, or anything such with a good result of Franz's drivers or Haas, then we are back very quickly back in the previous situation. So, we need to work hard, try to do as much as we can. I mean, on Sunday, there's a chance of rain, so maybe there is also a chance for us and then try to fight as much as we can until the end of the season. And then we see what comes out.

Q: What are the biggest lessons you've learned with this 2022 car?
MK: How long would you have? No, I think at the end of the day, the basics of Formula 1 are still the same. So, you know, you have to have strong aerodynamics, you have to be on the maximum with everything. You have to provide good feedback to the drivers, and you have to have good drivers. So, all in all, it's always the same. And if you lack in one area, it's difficult. If you're lacking two or three, then it's getting more difficult. So, we need to try and improve on that and do better in the future.

Q: Final one from me, about Sebastian Vettel. He put in a very determined drive last weekend. Have you seen any change in his approach or what he's delivering in the car since he announced his retirement?
MK: Not at all. Maybe even more focused than before. He was the kind of guy, when he made his decision, he said, he will give you everything until the end. And we don't speak farewell, we don't do a party until it is the moment to stop. So, from that point of view, it is all business as usual. And we don't really speak about stopping or whatever. We speak about Suzuka, then we will speak about Texas, and then, come Abu Dhabi, we will speak about what comes after. I heard that he wants to come back to Suzuka next year. So let's see.

Q: (Ronald Vording - Motorsport.com) It's a question to Franz. You just said 'we took Nyck because he's fast' - but at the same time, he also has knowledge from different teams. He has a lot of experience in the simulator, how important are those factors to you? And secondly, they expect him to guide the team a little bit in that regard, as Pierre Gasly maybe could with his experience? Or do you expect that more from Yuki, who will be the driver with more Formula 1 experience next year? More than his teammate.
FT: We will see. The guidance of the team depends also on the performance of the car. If we have a good car, it's easy for both drivers. If we have problems in the car, then I think that it will not be so easy to sort out everything, because Nyck hasn't so much Formula 1 experience, Yuki is still in a learning process - but I think that Yuki next year should be matured enough to give technical guidance. Nevertheless, I expect a lot from Nyck because he has experience from the racing categories where he won races and championships and therefore once more if the car works, I think that we will have a successful year.

Q: (Scott Mitchell-Malm - The Race) For Otmar, after what happened with Fernando and Oscar, obviously, whoever you signed was going to be just numerically the third choice driver, but how much of a statement is it that instead of taking one of the easily available free agents on the driver market, you worked to get Pierre, given he was under contract with another team and therefore that meant a slightly more complicated process?
OS: Yeah, Pierre, like I said, we put him on the shortlist. And one of the reasons was that he was going to become available in '24, not for '23. And then it became quite evident to us that, like I said before, he's got youth, experience and speed. And that's difficult to say for a lot of drivers that are still within Formula 1. Even, you know, the other two that you mentioned, didn't have those things. So, we're fortunate to secure Pierre and look forward to working with them.

Check out our Saturday gallery from Suzuka here.