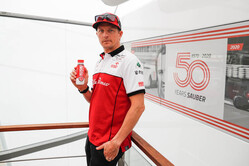 Kimi Raikkonen is back racing, albeit in a one-off appearance in NASCAR for Trackhouse Racing later this year.

The 2007 world champion, arguably one of the sport's most popular drivers, albeit also the least talkative, finally retired from F1 at the end of last season, having contested a record 349 races.

Subsequently appointed team principal of Kawasaki's Motocross World Championship team, the Ice Man will return to 4 wheels later this year when he makes his NASCAR Cup series debut at the wheel of the #91 Chevrolet in the ‘Go Bowling at The Glen' Watkins Glen race on 21 August.

"We had more talks about it, how would it work, where the race would be, and all sorts of other things," said Raikkonen, according to ESPN.

"There's a lot of things involved, and it all made sense for me," he added. "It's one race, so it made sense for all of us as a family. I always enjoyed it when I had my few races (in the US).

"Hopefully we have a good race and good fun. Obviously it's a new car and I've never been at the track. But I'm sure we can figure it out."

In 2011, having left F1 at the end of 2009, Raikkonen debuted in the North Carolina Education Lottery 200 at Charlotte Motor Speedway going on to finish 15th. He subsequently went on to race in the Nationwide Series at the same track for Joe Nemechek and NEMCO Motorsports, finishing 27th after having debris stuck on the grille of his car and getting a penalty for speeding in the pitlane.

He then tested Robby Gordon's car at Infineon Raceway, with plans of Gordon fielding a two-car team at the Toyota/Save Mart 350. However, the Finn crashed the car in the test and the deal fell through.

Returning to F1 in 2012 with Lotus he scored a win in his first season back, returning to Ferrari, with whom he had won his title, in 2014.

Ironically, having quit F1 at the end of last season, his replacement, fellow-Finn, Valtteri Bottas is enjoying unexpected success with the Swiss-Italian outfit.

If the Watkins Glen outing goes well, Raikkonen has intimated that he's open to further outings.